I was very lucky to see Elbow play their hometown concert last week, thanks to winning tickets via Nicholson’s pubs Facebook page (in case you hadn’t heard, Elbow have released another beer,recently, Charge was launched at Nicholson’s pubs around the country in March) haven’t been to the Manchester Arena (I’m sorry I can’t bring myself to call it the phones4u arena, it sounds daft) in about 20 years mostly because I find arena gigs can feel awfully
impersonal due to almost always having tickets right at the back. Not to worry this time though, as well as being seated in the friends and family section Elbow also manage to make it feel intimate. 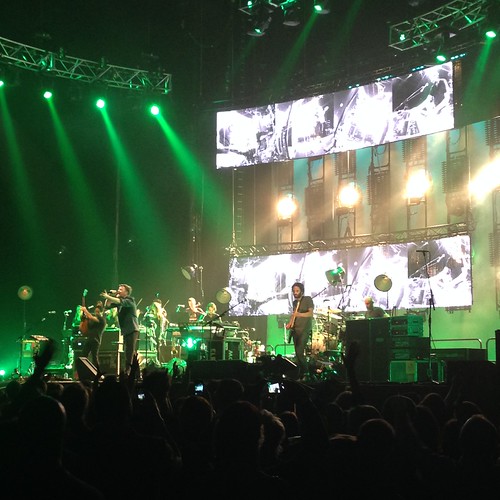 Guy Garvey spent much of the evening walking down a ramp that cut through the centre of the standing section to ‘stage 2’ to be truly centre stage, entertaining the crowd with anecdotes and love for his fair city, this also played host to couple of acoustic numbers, giving the mini orchestra a wee break. As they’ve recently released a new album the set list consisted of several new songs, but they didn’t disappoint with the obvious crowd pleasers either. 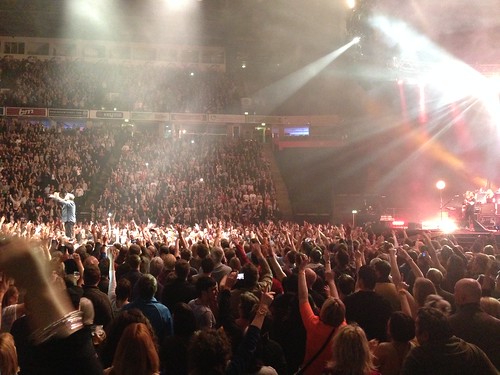 My gigging partner for the evening, Sue filled me in on the amusing but sad story behind The Loneliness of a Tower Crane Driver whilst Mirrorball, complete with huge mirror ball dazzled the room, Grounds for Divorce was one huge sing along.
Before we knew it, we were all singing ourselves hoarse to the final incredibly beautiful song, One Day Like This, as the odd looking ‘lights’ Sue had pointed out earlier turned out to be balls that fell from the ceiling, bouncing around the crowds but mostly being bounced at Guy, time was up,almost 2 hours of great music.