Last night I headed on down to Manchester’s Deaf Institute for a gig featuring not one, but two Icelandic artists in the form of Snorri Helgason and Ásgeir who are both often described as folk, melodic sometimes poppy but most definitely folk.

I was looking forward to this immensely (despite only hearing of and booking my ticket less than 2 weeks ago), as I’d previously had the pleasure of seeing Snorri perform back in November at Iceland Airwaves festival, against the interesting back drop of a men’s clothing store, surrounded by deer stalker hats!

Up until a couple of weeks ago the only Ásgeir track I’d heard was a cover of Nirvana’s Heart Shaped Box on YouTube (and only a matter of days before Gizmodo ran an article entitled ‘watch this one woman band cover an uncoverable Nirvana song’ err yes not that uncoverable then). I’ve since listened to the few tracks available on Soundcloud and liked what I’d heard.

The Deaf Institute is a wonderful gig venue, small and intimate without feeling overcrowded, bird print wallpaper lines the stage area which is draped with deep red, luscious curtains, there’s even a fireplace if you look hard enough!
Snorri kicked off proceedings with an all too short 30 minute set, playing at least a couple of songs I recognised from his most recent album Autumn Skies (give it a listen on Soundcloud) and the harmonica made an appearance. There was new track he wrote whilst in Nashville which at first I thought was called mad cap (and didn’t know what to expect!) But by the end of the anecdote I realised that as someone had described the song to him as ‘like the last you drink before you put the candles out’ I realised it was called Night Cap.
Then it was all over, I managed to grab a copy of Autumn Skies directly from the man himself after the gig and managed to not to say anything too embarrassing in the process.

After a short break Ásgeir and his band took to the stage and started with two songs in Icelandic before introducing himself to the crowd and later on the rest of the band which includes his brother. 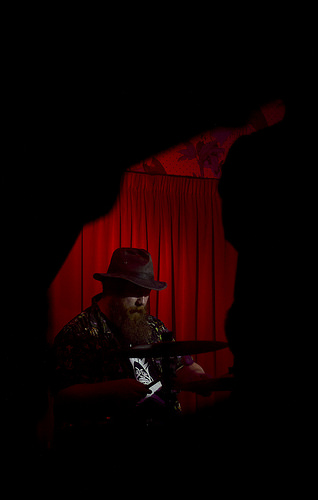 The afore mentioned cover of Heart Shaped Box was in there along with Dreaming, new single Going Home and finishing with the upbeat Torrent. great night all round, I’m hoping to catch both artists back at airwaves in November.
Oh BTW Ásgeir’s record Here It Comes with Heart Shaped Box on the B side is a Record Store Day release on Saturday 19th April – go buy it!