We started off what will likely be our last airwaves for a couple of years (but never say never right?!) pretty chill. We collected our wristbands from Harpa not long after midday (after a much needed epic sleep) then headed to Bonús and Vínbúðin to stock our kitchen up for the long weekend ahead.

Our first off venue gig then was Vök at Bryggjan Brughus, a really cool micro brewery where I settled in with an imperial stout as my first beer of the day.

I’ve been dying to see Vök for a while and was ecstatic as they played most of my favourite songs … although I can’t remember the first song the remaining set list was: Figure, Show me, Ég bið þín, Polar, Before and then they finished with Waterfall ~ so much energy it was an amazing start to airwaves.

Next up we decided to see where the new off venue described as the Viking brewery was as it was close by. We arrived as Dadi Freyr was starting, which turned out to be one of those surprise way better than expected shows. It turns out we’d seen Dadi before at our first airwaves in 2013 as one part of Retrobot.

It’s also worth pointing out what an awesome venue this is ~ with 10 taps and a flight of any four beers for 1000isk. It would also appear that any large beer is 800isk which beats prices in most bars for airwaves.

So we stuck around for Úlfur Úlfur, although for the most point I have no idea what they rap about they have cool music vids and were great performers even taking the time to teach the audience how to sear in Icelandic.

Then it was back to the apartment for some food before the official scheduled acts. We headed to Gamla Bio for Hugar, an ambient neo classical style two piece who combines beautiful visuals of the ocean.

These were followed by Valdimar an eight piece with amazing vocals!

Also playing on of my favourite songs Syn, I highly recommend going to see these on their other official performance on Sunday night at Gaukurinn.

In only a few weeks we’ll be heading back to Iceland once more for airwaves, so I’ve spent the past few weeks trying to listen to at least a couple of songs by all the acts on the bill I’m unfamiliar with. This has been no mean feat with over …. acts performing and at a conservative estimate I’m probably  quite familiar with about 10% of those meaning I had to whip up a spreadsheet to track who I’d listened to, their style and a rating out of 10. The plan being that I could then rank artists in some sort of order of preference to help choose who to see

So here’s a few new (to me) artists I’m hoping to check out, as nothing is guaranteed and even the best laid plans can go out the window

Sólveig Matthildur alerted my radar as part of Kælan Mikla, a synth punk band I’ve already heard a few tracks by, however these tracks are nothing like that.
While the synth is still there, these tracks are darker and as the EP title tells you she is “taking you on a journey, through unexplained miseries to the acceptance of sorrow”.

Pranke is a band I hadn’t heard of before, but with a descriptor of Kraut Rock, I was duly interested, particularly as their Soundcloud hastags were Math Rock/Pop – what could that mean?
Odd time riffs definitely, loads of energy seems certain.. I was also reminded of one my favourite Canadian experimental bands, Holy F*ck.
With only 2 tracks on their Soundcloud it’s hard to judge, but one band I’ll be aiming to see this year.

Hugar are Bergur Þórisson & Pétur Jónsson, both of whom have been making music in Iceland for many years.
It came as no suprise for me to read that one half of the duo supervised the BAFTA Award winning score to Broadchurch by Ólafur Arnalds, as the ethereal instrumental tracks feel familiar yet new with heart-rending strings and gentle uplifting piano.
Úti (Outdoors) and Upphaf (Beginning) have turned out to be my favourite tracks so far, but I’m looking forward to seeing more at Airwaves.

If you’re going to Iceland Airwaves this year, let me know in the comments who you are planning to see!

So its actually the last day of airwaves, and I’m still back filling from day two. So day two was a day of off venue venues we’d not been to before, starting with Eldsmiðjan (a pizza restaurant) for Elin Ey, it was quite surreal as people were eating their lunch, and people packed on the staircases whilst waitresses squeezed past with trays of food. Elin Ey is one part of Sis Ey, but her set today was acoustic and down tempo, a stark contrast to the upbeat electro sound of her band. She also threw in a cover of Fleetwood Mac’s Dreams which was so chilled and oddly perfect for the strange surroundings. 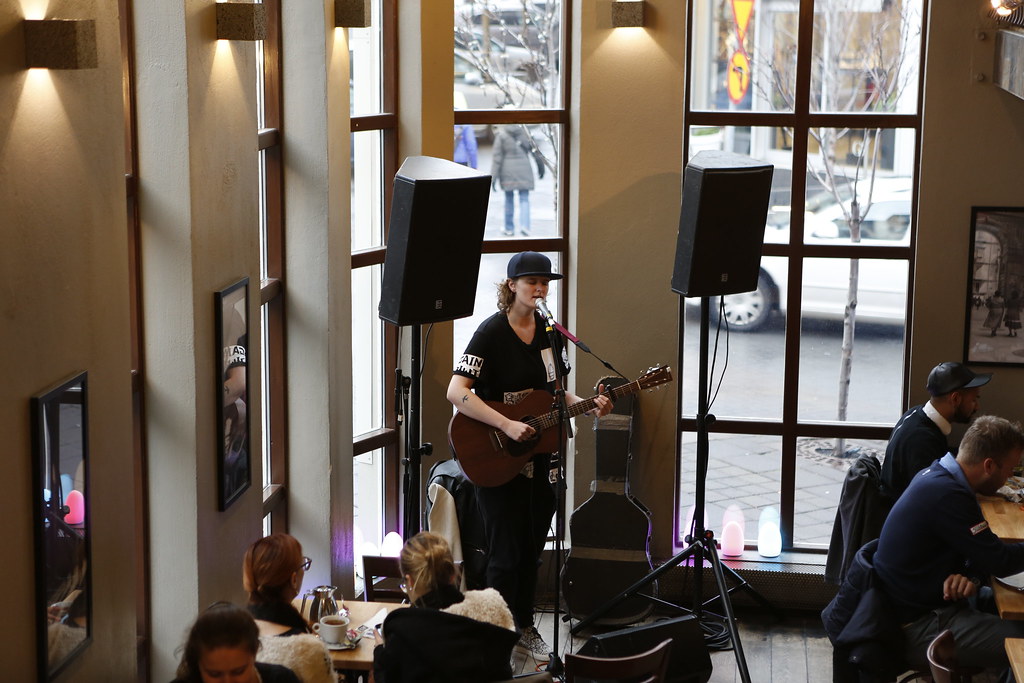 Next we headed to Bio Paradis, a cinema that also has a gallery space – there’s a group show on at the moment, mostly 2D media, worth checking out if you’re still in Reykvavik. We came to see Sekuoia from Denmark, acoording to the bio, Sekuoia is just 1 guy, but there were two performing today, maybe that’s just for the live version? There were a few technically issues (such as the sound cutting out completely), but they smiled and got on with it, chilled out beats, sort of reminded me of Royksopp, but not. 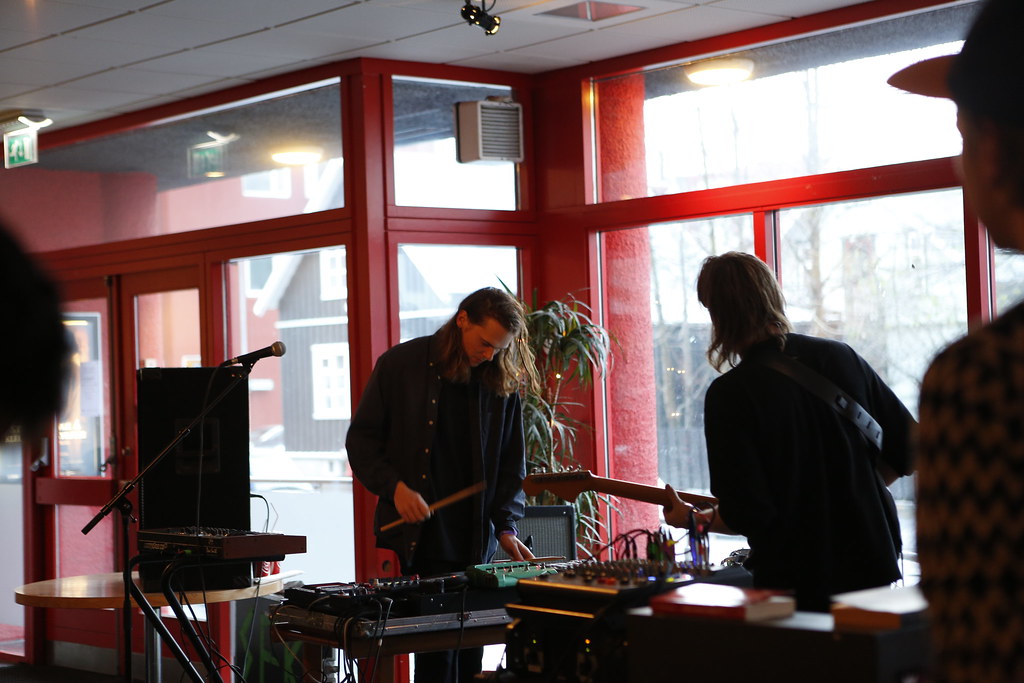 Next stop was Galleri Fold, next door but one to the infamous Lucky Records (whose Off venue program lasts a full weel). We’d never been in here before because it’s always had that vibe of posh commmerical gallery. We stayed for two bands here – the amazingly prog rock Electric Space Orchestra, whose intruments included a digeridoo and the theremin. They were followed by Black Desert Sun who were more traditional rock metal. 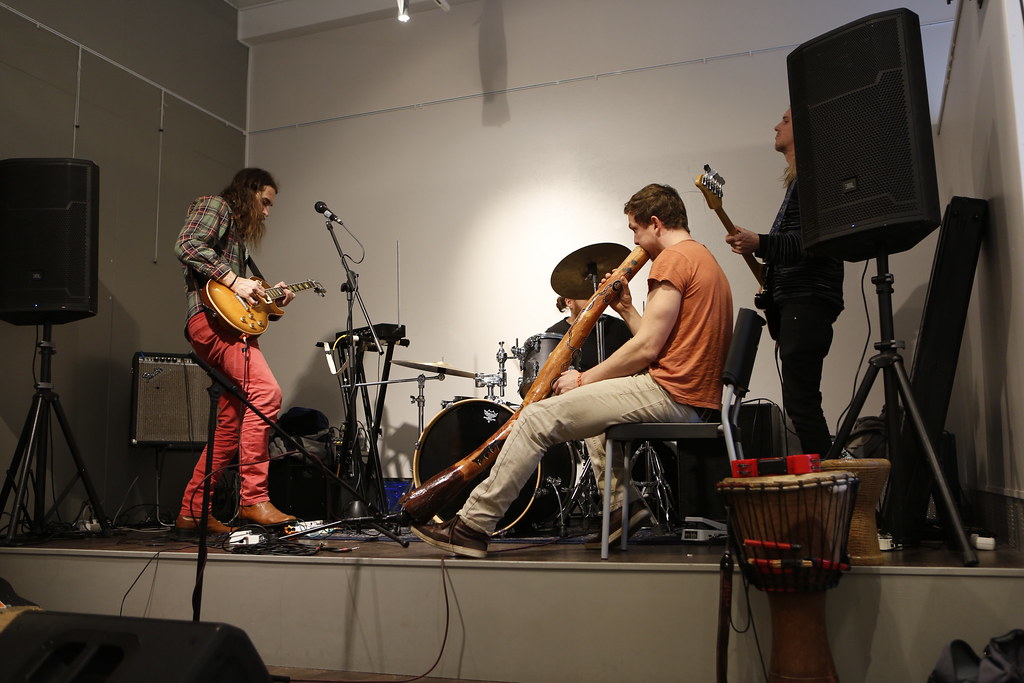 Next up it was time for some on-venue action, so we headed to Harpa, starting out watching a band trubotharnir by accident, as the sign posts outside the rooms were incorrect, no offence to this band, they sounded great but we were wanting to check out Borko next door.

Always a humerous performer and once again flanked by trombones and trumpets, Borko got our spirits lifted with tunes such as Ding Dong Kingdom and Sing To The World and it was all too soon before he was departing the stage. 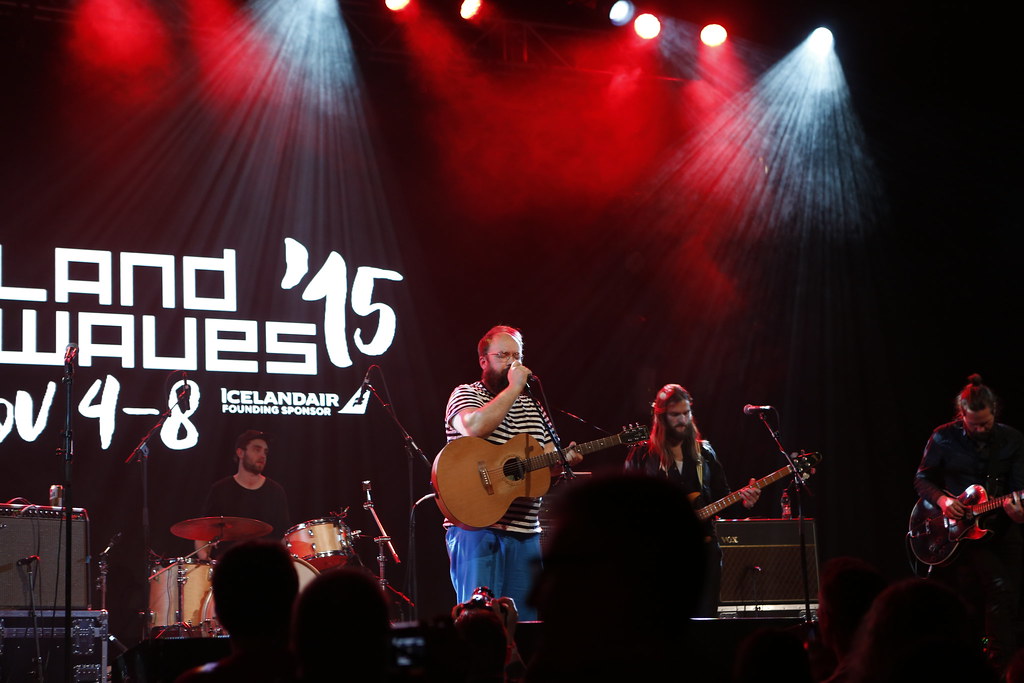 Next up was Low Roar, which as the name might suggest, sound like a low roar, lo-fi, but I’m afraid their performance didn’t set me on fire – somewhat lacking the roar bit. This was despite having enjoyed listening to some of their tracks on Spotify. So if i’m honest, waiting for Mercury Rev was like torture. But eventually we were put out of our misery, and Mercury Rev burst onto the stage in spooky smoke, throwing long shadows around the stage. 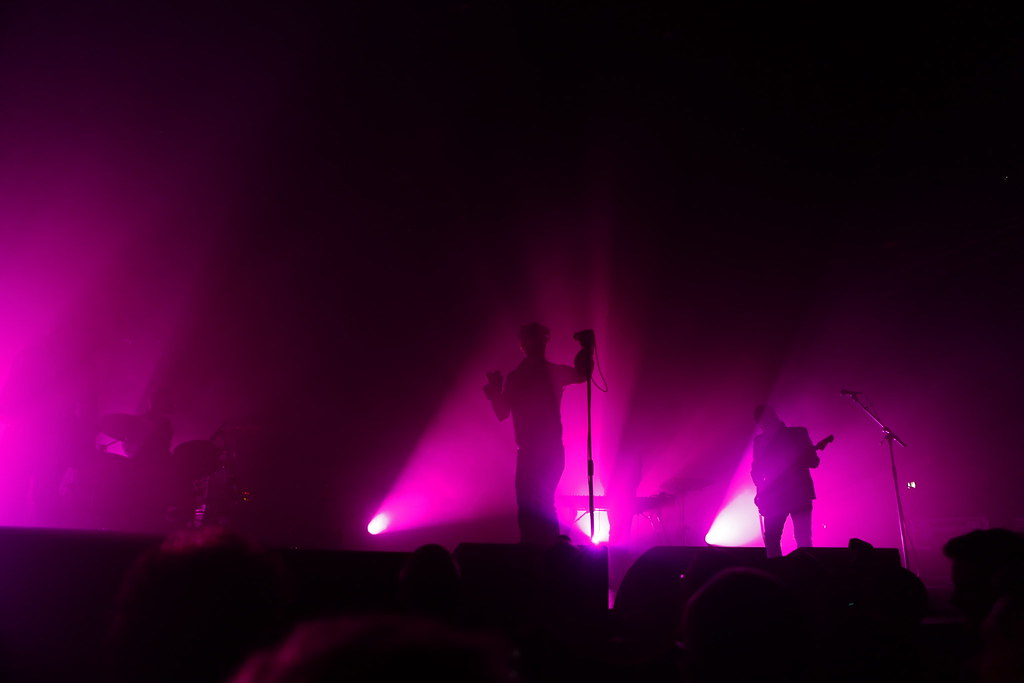 They were nothing short of amazing, Jonathan Donahue’s flamboyant gestures and performance were show stopping. The only suprise for me of the set was that they didn’t bother with recent single ‘Are You Ready?’ (was it really a single? it had a video release, which makes me think it kinda is). And I also didn’t really expect them to play my favourite (Little Rhymes) – but this didn’t stop them being a favourite of the festival.

We took it quite slow today, starting the day by heading to Kringlan Mall, which we’ve never done before for a bit of shopping. The husand bought a new hat and I, we I bought some yarn. Three lots of yarn from three different shops. I have a lot of crocheting to do when i get home. After walking back to our apartment, we decided to catch some off venue performances and started at Hlemmur Square – a hostel with a great bar (seriously, they have an amazing beer range, complete with menu with tasting notes), only stones throw from our base. First up were For A Minor Reflection, with their amazing intrumental, experimental, post rock throw down, it was packed, so it was more listen than watch – but this always happens with this band. We then decided to hang around for Börn – a proper post-punk band, the leas singer singing and screaming like her heart was being ripped out with a rusty fork at time. She seriously reminded me of Ian Curtis with her onstage performance. 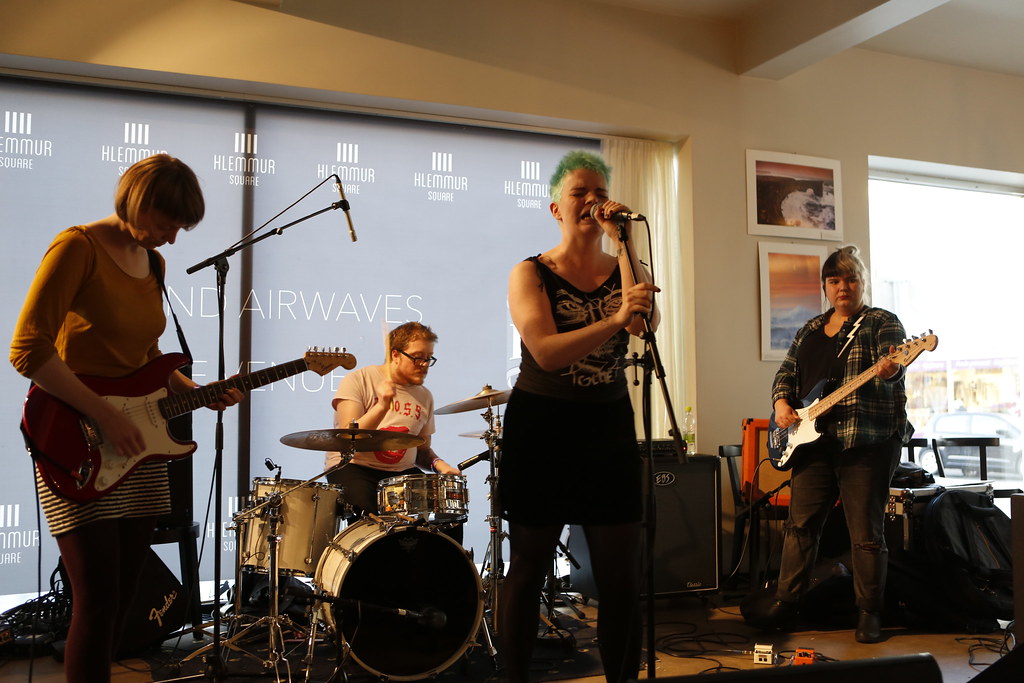 Next up was Miri more rock, less punk, grinding guitars and apparently the drummer also works at Hlemmur! 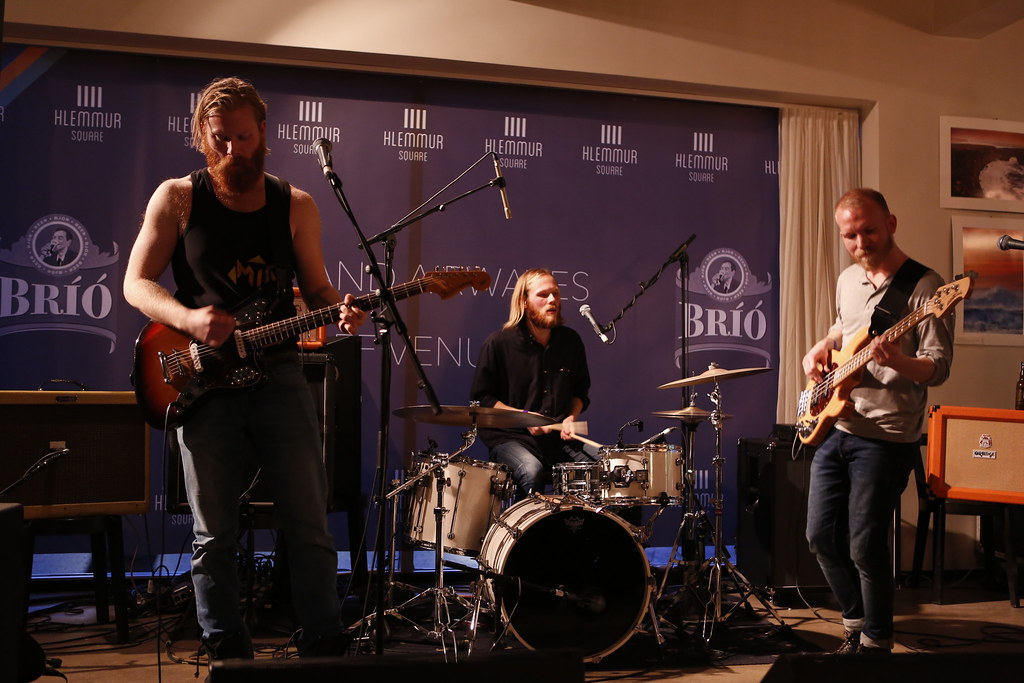 The only official ‘on venue’ gig we managed was Mafama at Idno – it was a bit of an odd one, as a venue, it looked initially like we’d stumbled into a restaurant, that used to be an old cinema or theatre (think huge ornate ceiling). We only stayed for a couple of tracks, due to a few aches and pains and the need to sit down being more pressing. I enjoyed what I saw / heard any how – after listening to them via Spotify for the past few months, the traditional band set up (bar the singer with his errr noise making machine) really surprised me. 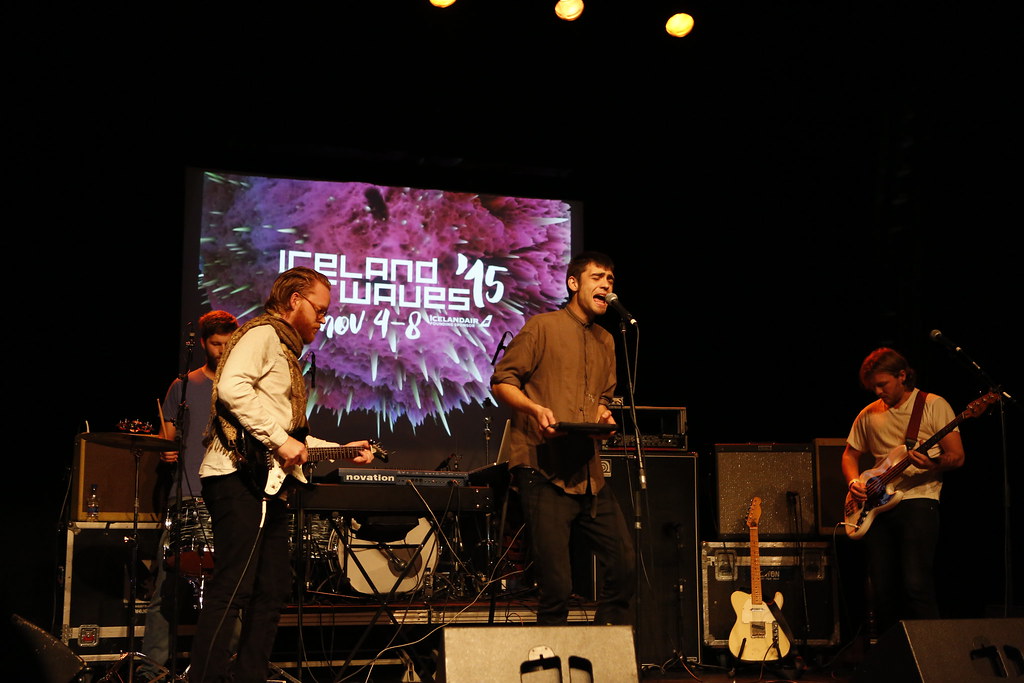