I know this album has been out going on for 9 months by now (in fact my procrastination skills are so on form, I just found an 8 month old draft… oops), but seeing as I’m not the sort of person who gets advance review copies, there was no way of pushing something out around the time of release. I also believe that these things take time to sink in and be fully absorbed – I can tell you that Crystals, which started out as a firm favourite in the beginning (released almost a year ago this week!), went to being at the bottom of the pile, then back up into my top 3 (maybe). Initially I loved it because it was new,  in terms of UK releases, the newest single in 3 years, then once the entire album was released I preferred other songs as they were newer, but then in late 2015, possibly after seeing it performed live I fell in love with in all over again. The huge swelling drum beats that start the song before Nanna’s vocals win me over every time. It was also used for a Disney film about dinosaurs which I have not seen. 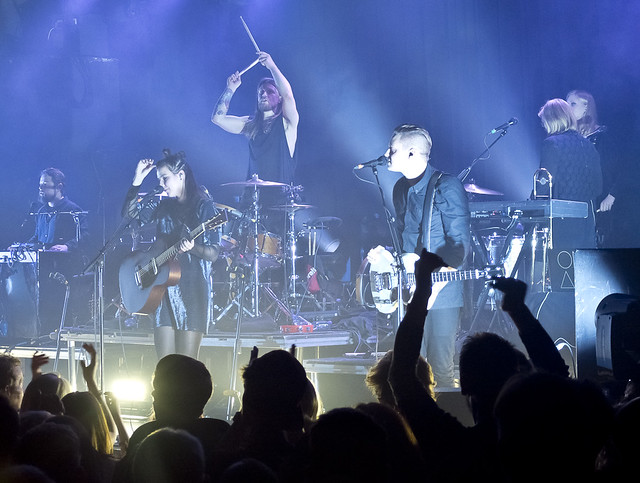 Black Water was another instant favourite, I used to sing this in my head whilst I was swimming in the summer and found it was good for focusing, except where counting how many laps I was doing was concerned! Also the lyrics felt like they could have been written about the characters in the book series I reading within the supernatural genre which was an unusual twist. Wolves Without Teeth might just be my number one track though, again the drum beat starts up and it could be the rhythm of the beast running – now I’m in training for a 10km race later this year, this track is on my essential playlist as the beat is spot on for me. However Slow Life is a track that took until this year to really gain a place in my heart, I think maybe because it feels to me like a real winter tune, and here in Oxford at least, winter didn’t really kick in until February. The whole feel to the album is a generally more larger, all encompassing sound, the music press would probably say it’s a more ‘grown-up sound’ but that would also imply that the previous album was immature sounding? they haven’t lost their playfulness which is part of why I love them. There’s still plenty of creatures as metaphors à la Dirty Paws.

As I mentioned above, I travelled to see OMAM in concert back in November, as now we live in Oxford, a lot of bands don’t play locally, particularly non UK bands (where as in Manchester, most bands if playing outside London will play there as well). We live equilateral travel time from both Bristol and Birmingham so chose Bristol as my husband has never been, and also it was a Friday night rather than midweek which didn’t require time off work which is always a plus.

The gig itself was amazing, even if the venue was not. The band played their socks off, the sound was possibly better than on CD, I don’t know why I’m always amazed by how good Icelandic acts sound live, maybe I’ve seen too many poor bands or bands in bad venues? Or maybe they’re all just so good at what they do… Anyway, the only downside, was missing part of the gig – how did this happen you ask? well the doors opened at 6:30pm, usually gigs open the doors at 7 or 7:30pm with the main band being on stage at 9pm – and either 1 or 2 support acts on, curfew is usually 11pm unless it’s a Sunday – I say usually because me and my husband have collectively being going to gigs in various cities since the 1980’s and this is the only time we’ve come across a gig for all ages that the curfew was 9:30pm, I shit you not! So after finding our hotel, dropping our bags, rushing to find somewhere to eat quickly, then heading to the venue, stupidly thinking we might catch the end of the support act, we walked in part way through King and Lionheart (full set list here) Because as it turns out that in order to maximize profits, the Bristol O2 academy does a club night every Friday opening at 10:30pm – this is not something that is communicated to attendees despite it being highly unusual for a gig venue as speaking to other gig goers who’d also travelled from various cities in the UK they were all equally surprised. The venue was also overcrowded and a potential fire hazard IMO, with staircases that led to fire exits jam packed and impassable, and did I mention some parts of the room you can’t even see the stage?!… but I digress. Of Monsters and Men and their touring band played so amazingly, my favourite part was when Nanna took the drumsticks and started pounding what I think was a Timpani drum with a look of pure mischievousness on her face, before rushing back to get her guitar strapped back on to finish the song! which may or may not have been Crystals… I really hope I get the opportunity to see them play again with this album, but at the moment it seems to be festivals only and no mention of an Airwaves appearance yet (I was praying for last year, as they had two empty tour dates during Airwaves, but I guess everyone needs a break!