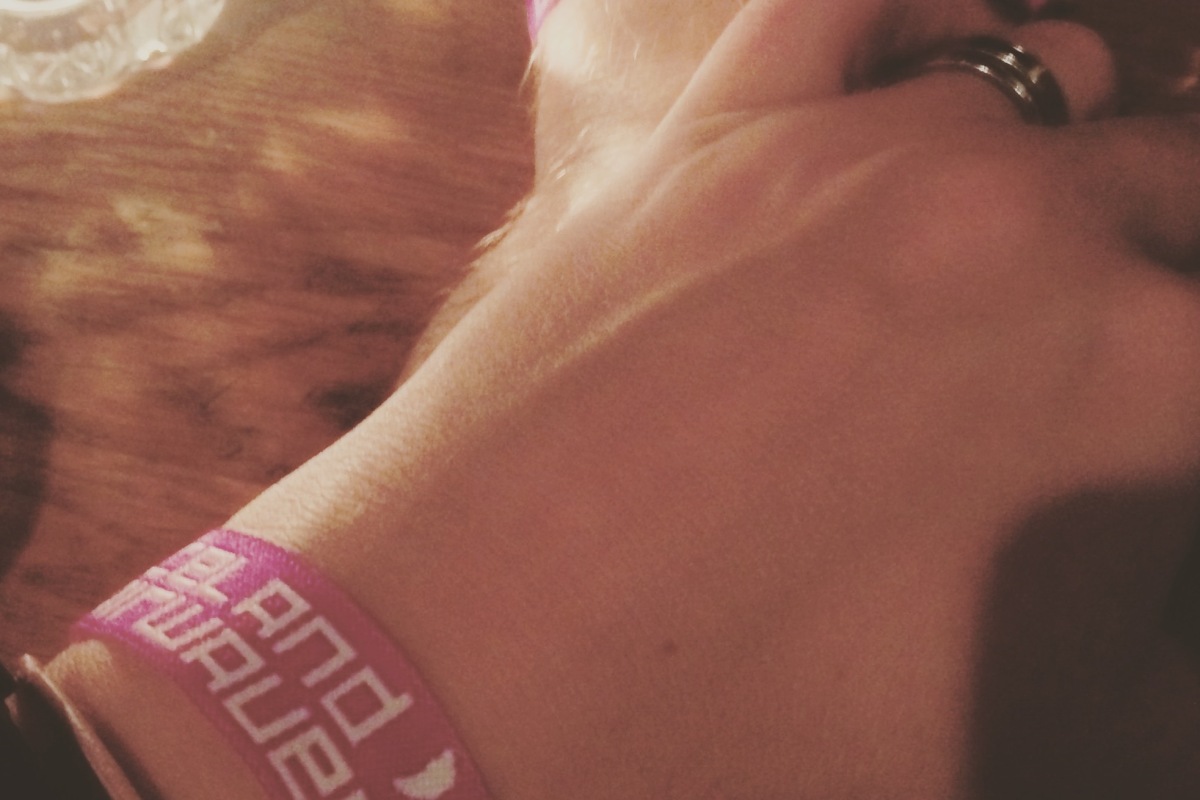 The last day of our South Island trip, we were heading from Vik back to Reykjavik for Iceland Airwaves festival. Our plan was to see the infamous black beach, Dyrholaey and be at our apartment for 3pm, as we had to return our car by 3:30.

So off to the black beach – it was less than 10 minutes drive from our hotel, and when we got there, it was raining and blowing a gale, all whilst the sun is shining! 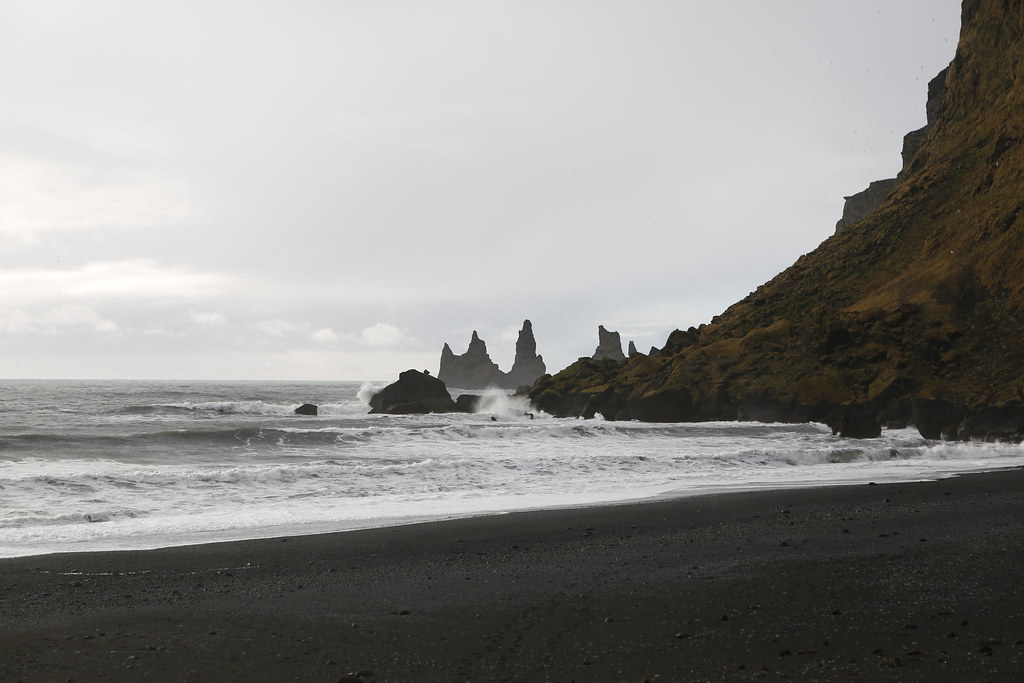 Then it was time to visit Dyrholaey. it was a landmark already programmed into the SatNav, however we were expecting to be taken onto the beach aside it. Not onto the cliff overlooking it. It was the scariest drive of my life, so steep with what looked like a sheer drop to the side of the single car pathway. Once we reached the top and I stepped out of the car I seriously felt ill, the thought of driving back down was terrifying. However it was more than worth it for the view – also worth mentioning that there is a WC up there, should you need it! 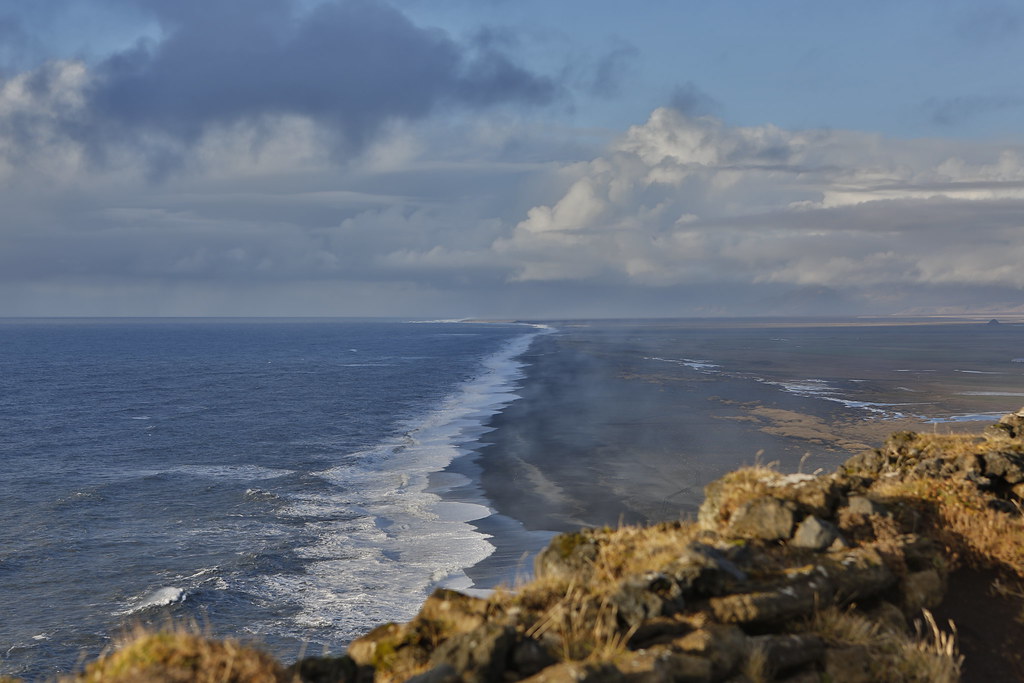 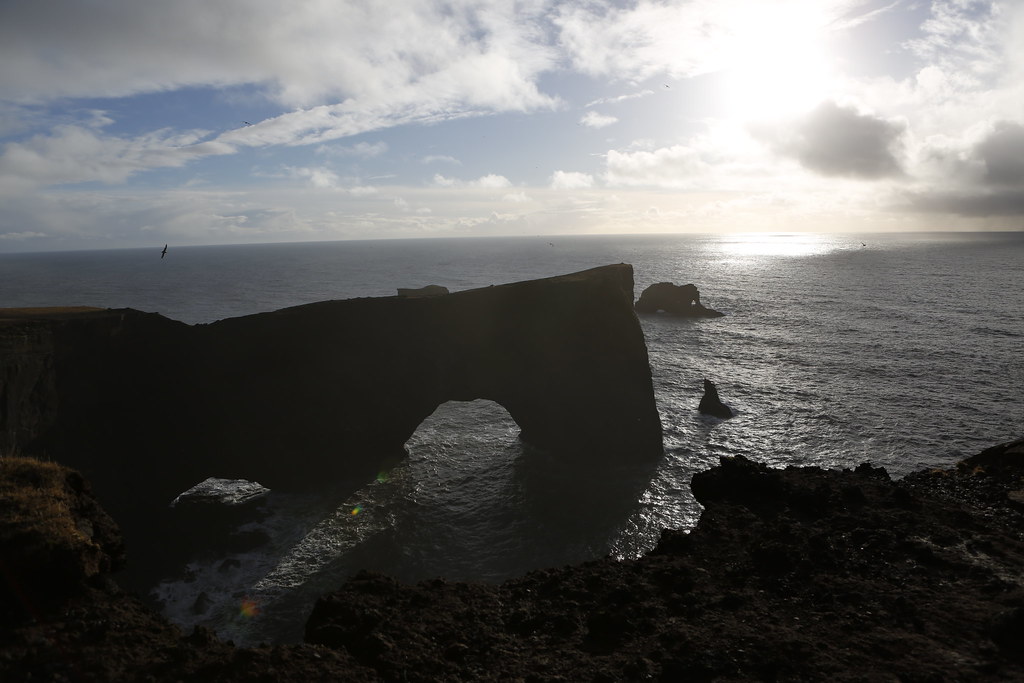 The drive down, oddly enough was less scary, even though we had to deal with passing a car, which was a bit hairy! Then it was time for the drive back to Reykjavik, which again was full of natural wonders, such as snow capped mountains, more waterfalls, at one point we got stuck in some very slow moving traffic, behind a hearse!

We arrived at our apartment just before 3pm. Went to check in, and uh-oh, no keys left for us. This was despite having email confirmation and making payment 10 days before arriving, our booking had been lost… we were then given a room that was technically an upgrade. Yay, we thought, but it is a weird room, we gain a sofa to watch tv on, but lose a wardrobe – there’s a chest of drawers but this was stuffed full of spare bedding! We’ve actually stayed in this same apartment block for the previous 2 years, so weird to find that the luxury room doesn’t have a kettle, or tea, coffee & oil for cooking – which were previously provided in our basic room. Unessassary shopping trip ahoy.

Anyway, we didn’t get up to much else, after sorting our room situation we mnaged to get the car back to BSI with seconds to spare. No extra payments were made, at times we did wonder whether all the pot holes and gravel roads would end up with some additional fees for damage, but thankfully not.

We then headed directly to Harpa to collect our wristbands for Airwaves, followed by Lebowski for a burger – its a personal tradition. And at this point we’d realised we hadn’t eaten since breakfast!  We then headed back to our apartment, too tired to head out for some early starting Off-venue events, and this played in our favour, as around 7:30pm the Northern Lights came out in full force! Although many, many guides seem to insist that you need clear, dark (ie no light pollution) skies, here is proof of what you can see & photograph, when your back yard is awash with street and security lights! 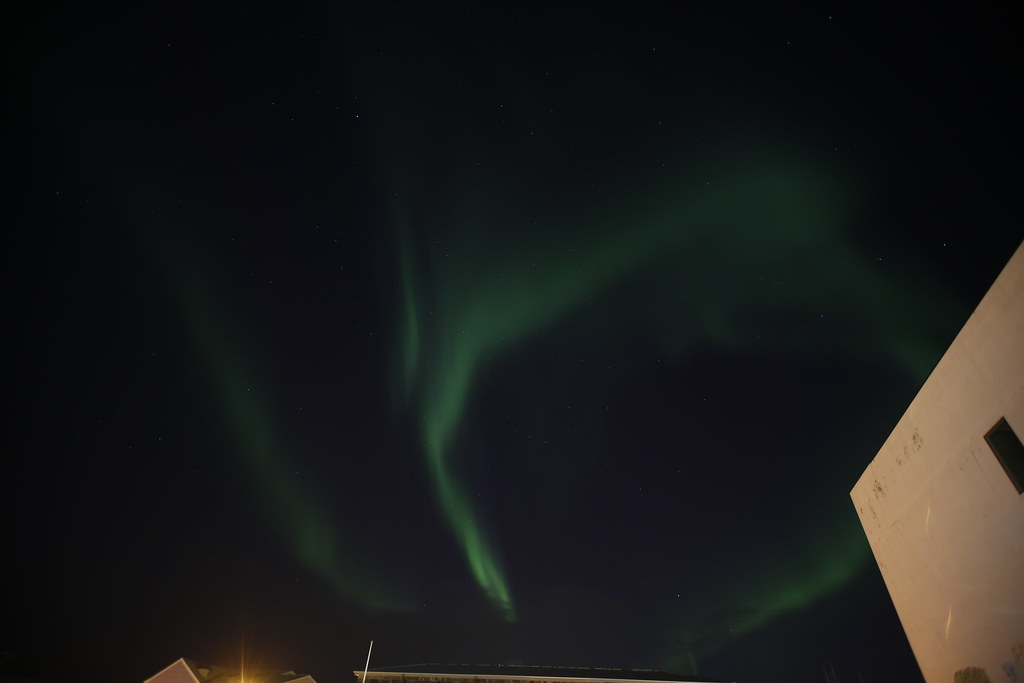 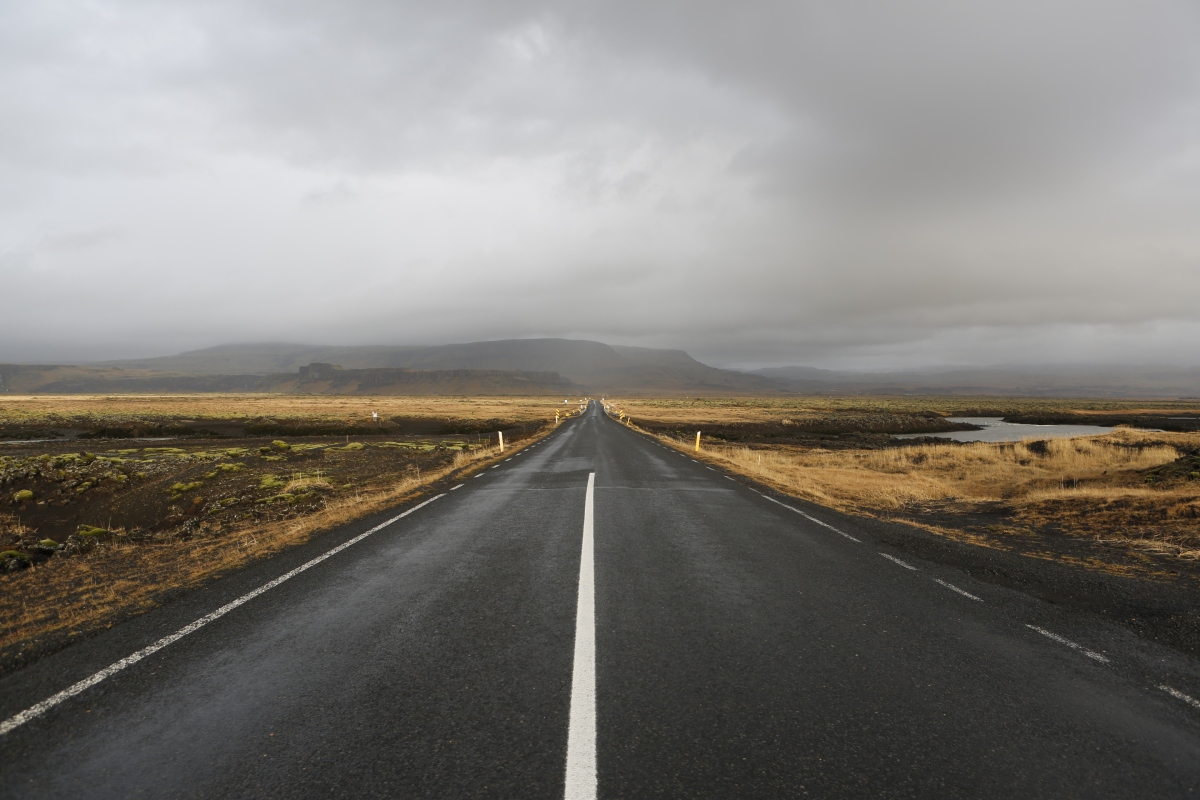 Today’s mission was quite simple – to visit Jökulsárlón glacial lagoon, approx 2.5 hours drive east from Vik. It did take slightly longer, to once again being exposed to amazing scenery along the way. Waterfall after waterfall, rainbows, endless expances of lava fields, black volcanic matter, green mossy hills, some parts reminded me of the teletubbies landscape.

We were starting to get distracted, then realised we needed to get a move on and made it to Jökulsárlón around 2:30 in the afternoon, thankfully. After being there about half an hour it started to rain, hard, however by this point we were warming up with coffee in the cafe, which also sells soup and sandwiches, and souvenirs. Oh and free wifif – just ask at the desk for a code!

Back on the road towards Vik, we tried to stop off at the places we’d seen but not had time to stop at, most of the area is known as Katla geopark, and if you stop at the rest stops marked with signs indicating a picnic area, there are boards with information about the area.

Once we arrived back in Vik, we ended up going back to Hallsdorkaffi for dinner again, as we’d managed to yet again missed lunch (after a trip to Vínbúðin to stock up our room). Then exhausted, we headed back to our hotel, where we had a power cut, more rain, more rain, and upon reading about a high magnitude of aurora activty, set my alarm for 6am. unfortunately there was too much cloud (rain cloud), so back to bed we went.

On our 2nd day, we awoke to the sound of rain pounding on the roof of our B&B, we’d been able to choose what time to have breakfast, so a long lie in was relished. For breakfast we were spoilt by our host – we got the opportunity to try foods that we wouldn’t normally – such as Icelandic lava bread (rye bread baked using the geothermal head underground), with boiled egg and pickled herring – this was so good (I can’t believe i’ve not tried it before), along with traditional icelandic smoked lamb, we tried two types – one was very smoky smelling, the other was marbled throughout the meat – this was my favourite. Along with all this was more meat and cheese, soft boiled eggs and homemade bread – all so delicious and washed down with a pot of coffee. We were sad to leave, I can tell you – but out into the rain we headed

Rather than use the SatNav, we decided to use the scenic map we’d picked up, so we drove on a more local road than the ring road, and stopped off at Knarraros Lighthouse, where some wild horses came to inspect us – I was slightly worried, as I’d always thought of the Icelandic ponies and medium hight, these were huge!

We continued on road 305, which runs along þjórsá – Iceland’s longest river. At times the road was nothing but a gravel, farmland type road (our car was covered in mud). We managed to miss ‘the greatest panorama in Iceland’ which oddly enough was right next to fljotsholar – apparently a great place to buy carrots, but neither were well signed posted so we carried straight on until we reached Villingaholtskirkja a small, traditional looking church and home of the great Saga writerJjon Erlendsson.

Next stop on our tour was Urriðafoss waterfall, after taking the turn off, then thinking it was the wrong one as it went past a little guesthouse, we eventually arrived down a potholed road. It was worth it, there was another car of 4 people there, so very peaceful, the roar of the water is amazing.

After Urriðafoss we joined the 1 (the Icelandic ring road), and headed towards Vik. We did make a few more stop offs, as the ring road is littered with picnic areas or small areas you can pull off the road, to photograph stuff. There’s a ton of waterfalls, and lava fields, and just all round amazing, stunning, scenery and nature. Btw, the birds here are very flighty when it comes to personal safety, flying across the path of your car, my heart was in my mouth a few times!

So we arrived at our hotel in Vik, Hotel Katla around 3pm. We unloaded, then headed into the centre of Vik to get food, as all we’d not eaten since breakfast! Seriously in need of caffeine!

We ate at Halldorskaffi then bought supplies from the shop a few doors down, and headed back to the hotel, where we jumped in the hottub again, we were hoping to see the Northern Lights, but no such luck – another night listening to the rain battering the roof and windows!