Day 20/100 – well it seems my challenge has failed somewhat. I could’ve sworn I posted my day 4 review but as this was empty I guess not and in case you couldn’t tell, post holiday fatigue set in and stayed in. I’ve had a super busy week at work and this weekend had family staying so no real time to blog and now all that excitement is catching up with me and I’m coming down with a cold. But, I’ll try and remember what I enjoyed most about the last day of airwaves.

Clue, it was a lot. We went a bit off-schedule with our planning. This year the festival reduced the off-venue program, whilst the press have said this was for financial reasons, we heard from some locals that apparently it was because the Icelanders themselves apparently don’t buy tickets anymore and just attend off-venue shows – not sure how true that is? I mean they’d still need to book time off work etc to attend shows, another ru mour we heard was that Icelandic bands playing on-venue were limited to one off-venue show, however that ended up not being true, but it certainly was like in the past where bands played multiple shows througout the festival, and it’s not like the off-venue replaces the full festival – most of it shuts down at 7pm. For us the off-venue compliments the offical shows, making it easier to see more people if you see someone at lunchtime friday, that might free up saturday evening to see 1 or 2 other shows for example.
Anyway, we started with an Airwaves favourite – Una Stef, performing at Lucky Records, which turned into a full on dance party, which audience synchonised moves! 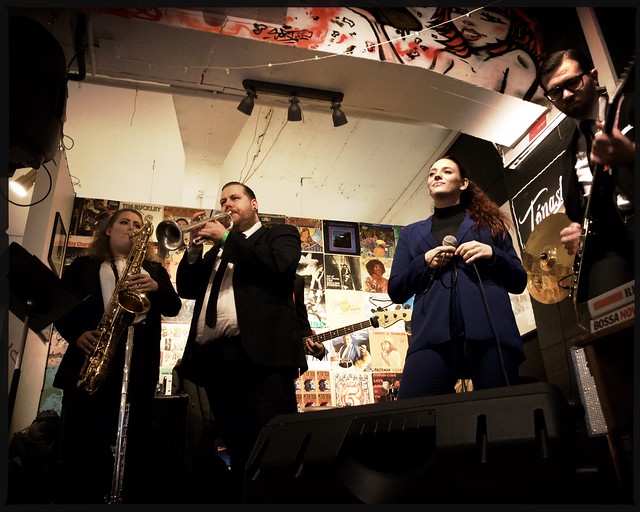 We made a detour to RVK Brewing, a micro brewery with tap room that was easily a highlight of the trip (much more than Brewdog Reykjavik which was oddly disappointing), the flight of beer was a lot cheaper and in much cuter glasses. They were also playing the new LP from Benny Crespo’s Gang which reminded me to pick up a copy on our way back past Lucky Records, where we also saw a snippet of Godchilla.

We then went for another Airwaves tradition and stopped off at Reykjavik Fish for a lovely fish supper, before heading back to our apartment to drop off our bags – here we were delighted to find the Northern Lights playing out! 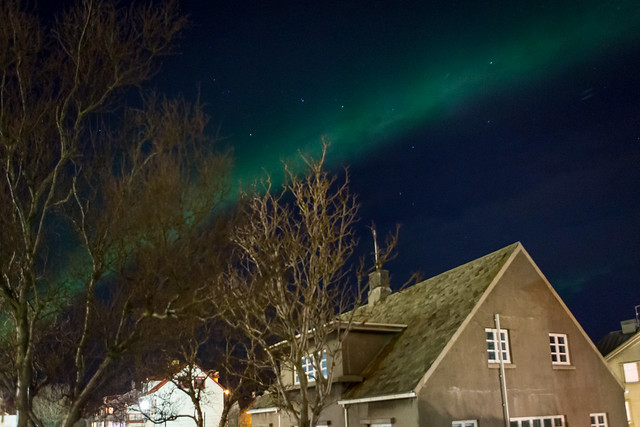 With this giving us giddy levels of excitement, we then headed to Hurra, as it was a venue we’d not been to, we caught the end of Munster’s set which was alright. We then headed across the road to the Art Museum to see Emmsjé Gauti, an eminent Icelandic rapper performing in the Art Museum, the venue was large and not very crowded when we were there, which meant we could sneak right up to the front for the feel good show (even though we didn’t understand the lyrics). We then went back across the road for Vio, who we saw last year off-venue and were great – really energetic indie rock.

Promptly followed by Dr Spock who are not indie rock at all, but loud and crazy punk rock, handing out marigold gloves and singing whilst wearing an elephant mask, and omg the crowd loved it and so did we!

After this we headed to our final gig of the the evening, timings being what they were meant we had just missed the end of Ceasetone (thankfully I managed to see them earlier in the week), but not too late for Benny Crespo’s Gang. I had first heard of them a couple of Airwaves back, being a fan of LayLow – I had no idea at the time that she was in a band that were much more rocky than her laidback, soulful music. Another crowd pleaser of a band, this small intimate room at Bryggjan Brugghús was pleasantly full of people dancing and singing. A fantastic end to the festival for us.

(We may have already bought early bird tickets for next years’ festival).

Still playing catch up with my blog challenge but hey ho. Time to get things rolling – some more recommendations from me. I’ve actually still got about 20 bands still to listen to, out of the 240 artists, and with only 2 days left to go that’s going to take some determination.

Una Stef, is commonly referred to as the Icelandic Alicia Keys, so common I think you’ll struggle to find an article about her that doesnt mention keys or Una’s other influence – Beyonce. Upbeat soul and funky tunes, its been amazing to watch her stage presence progress over the many times we’ve seen her perform over the years!
Check out her bandcamp here
Una plays Gamla Bio Wednesday 7th November at 23:30, and off-venue at Canopy on Saturday 10th at 18:00.

Úlfur Úlfur, are an amazing rap duo. I’m not usually enamoured with Icelandic rap (or any modern rap to be fair), but these guys remind me more of the Beastie Boys than Kanye. I don’t know what they’re rapping about, unless I look up their lyrics and attempted to painstakingly translate with google(which I have done). But that doesn’t stop them putting out cracking songs, including Brennum allt (rough translation, Burn everything) this one with a horse in the video. They play the Reykjavik Art Museum on Wednesday 7th November at 21:15.

Final recommendation for this post at least – Pop-punk youngsters Rythmatik played their first shows off-venue back in 2014. They then went on to win the annual music competition Músíktilraunir (past winners have included Of Monsters and Men, Mammút and Vök) in 2015. Since then they’ve released a couple of singles and earlier this year their debut album. However rumour’s abound this could be their last show, so go see them play at Húrra Wednesday November 7th at 11:20 pm! 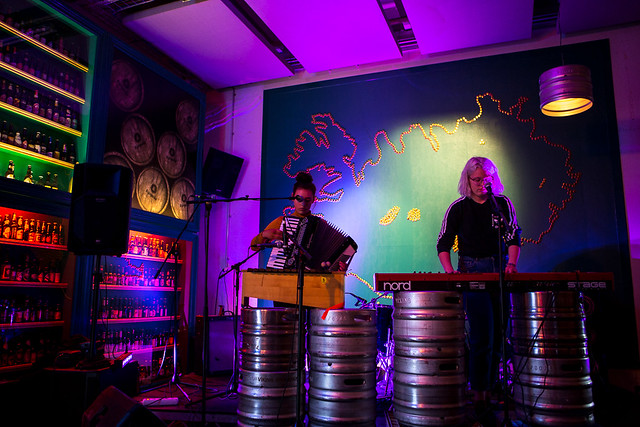 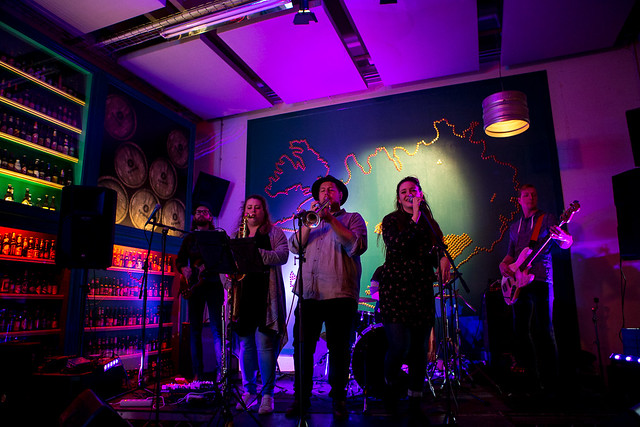 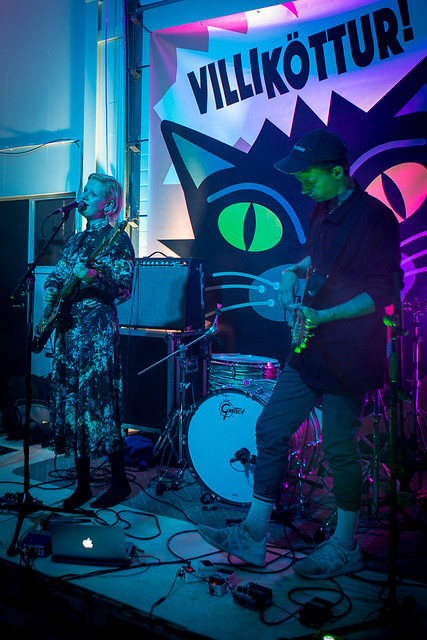 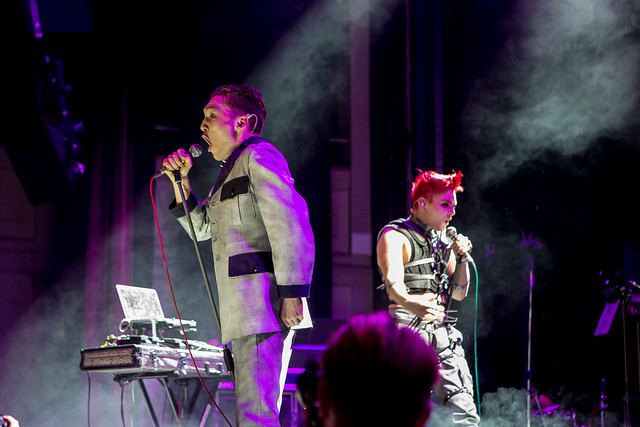 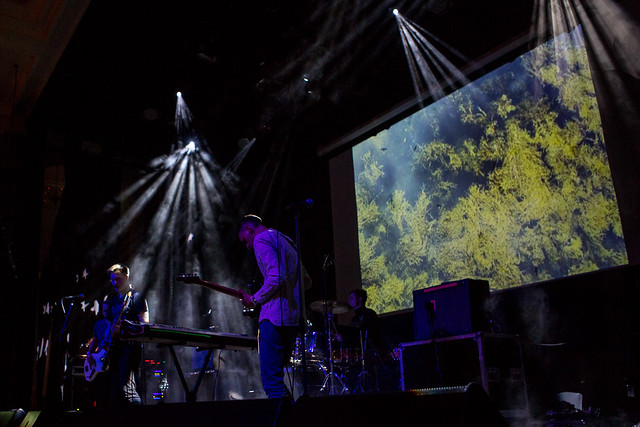 For some reason it felt like we didn’t see a lot of bands today – maybe we didn’t compared to last year, the off venue venues seem to be packed to the rafters (well everywhere except lucky records). And it’s not just that they’re packed, but that airwaves goers this year seem to struggle with actually entering a venue preferring to crowd the entrance as if they may need to bolt at any second – incredibly annoying. But still we ended up in Dillon to see the first – Wago a rocky band from Germany who were easy on the ears.
After Wago, IsKrystal played but they weren’t really my thing so we left and tried Bunk Bar a couple of doors down. Bunk is one of those off venue venues that is packed mostly with people congregating around the door way. It’s also a hostel with the bar also serving as the reception area which meant that as well as all the people watching the bands, buying food & drink there were confused people trying to check in. we actually heard 2 bands here (we couldn’t see anything until a barman pointed out they had a screen in the basement bar where you could watch). The first band Milkhouse I really couldn’t tell you much about, sorry they didn’t stick in my mind but Una Stef and her band were fantastic, she has a great soulful voice and in between her own tracks loves to throw in a cover of the Destiny’s Child track – Survivor.

Wednesday evening saw the first of the official airwaves program and we headed to Harpa to check out Benny Crespo’s Gang which featured Laylow on vocals – a different more rocky vibe than her solo stuff and we both enjoyed the set. We then nipped in and caught the end of Kippi Kaninus who was on before Asgeir, pleasant enough band but again didn’t make any real impression on me – maybe because I was pretty tired by this point / geared up to see Asgeir play somewhere ever so slightly bigger than the deaf institute in Manchester. He didn’t disappoint – although like last time he didn’t interact with the crowd much but filled the air with a quiet awe.